Alfred Ernest Bent III, aka “Buzzy”, was born on May 6, 1935, in La Jolla, California.1 His father was a B-24 pilot killed in World War II. His “mom was the sweetest, kindest, and a beautiful mother in La Jolla raising two boys as a widow near the beach at Windansea,” his friend John Elwell recalled.2

At 12 years old he was white snow blond, tan, well built, muscular, high spirited and at the beach every day after school. He borrowed a shortened plank that had been made for a dwarf who lived nearby; the son of a Navy Captain, Tommy Hederman.3

“Buzzy was surfing this short traditionally shaped plank with amazing maneuverability; exhibiting extraordinary balance and coordination,” recalled Elwell. “He was the apex example of the California beach boy to come: wild, aggressive, successful, full of life on a meteoric path.”4

Many did not, but the Windansea surfers of the 1930’s that did return from World War II resumed surfing only to find younger surfers on the beach and on the waves. Buzzy was part of the new generation. The old returning surfers became their unofficial mentors and the younger guys became “gremmies.”5

During the war, when things went wrong or got messed up in the military -- especially on board aircraft -- “gremlins” were blamed. These were little imaginary creatures that got into things and caused problems. When the WWII vets returned, they drew comparisons between gremlins and the young kids who were around on the beach getting in the way, throwing sand, and pulling off pranks. “Gremlins” was later slanged to “gremmies” which would later change to “hodads” -- those still learning to surf. The gremmies became the new “surf rats,” changing clothes in the street, mooning passersby -- things like that.6

“The board scene was of heavy ‘planks’ on The Coast after the war,” remembered Elwell. “Rumors were circulating of a new board and new name appearing on the horizon and it was Bob Simmons. Simmons had been making brief beach appearances in San Diego with his new boards and boomerangs; usually at lifeguard stations, then more frequently at the Tijuana Sloughs, at Imperial Beach, where Dempsey Holder was the San Diego County Lifeguard.”7

“In the late summer of 1950,” continued Elwell, “Windansea had a Luau and invited the Southern Californian surfing community. It turned out to be a wild bash with good size surf that day.

“Joe Quigg, Matt Kivlin, and Leslie Williams showed up with a new model of a surfboard they called ‘Malibu Boards’ [aka ‘Malibu Chips’ or just plain ‘Chips’] similar to Simmons boards but with pointed noses. They didn't do so well but caused interest. A San Diego City lifeguard Maynard Healtherly and his wife ordered the first couple of boards in San Diego, as did Buzzy Bent, and they had them by December of 1950. Buzzy bought a 10 foot Quigg that would be considered over-size today. They were an immediate success and immediately followed by board makers Velzy, Hobie, and others. Simmons had bowed out of mass producing.”8

“Buzzy knew and surfed with Simmons and was the only one who could take off inside of him and pressure him with speed on a wave. Simmons would stop by his house and pick oranges from his tree. They were good friends and Windansea was a favorite hang out for Simmons until his death in 1954.”9 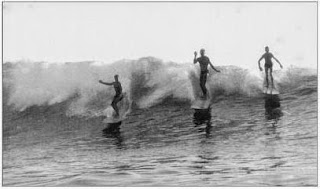 “Buzzy Bent became a overnight phenom,” continued Elwell, “catching more rides, getting the the best waves, and creating a new standard of surfing in the next few years... Buzzy was nonpareil; none better and he became better each year.10

Not to be confused with Buzzy Trent, Buzzy Bent became a pioneering surfing stylist, often credited for inventing the “WindanSea bottom turn.” Dale Velzy said that in the early 1950’s, Buzzy Bent was "IT!" -- the surfer that all the other San Diego wave-riders looked to for cutting edge moves and inspiration.11

“Those of the time like Velzy, Quigg, and those that saw him were astounded by his skill,” Elwell remembered. “He was an inspiration to others like Pat Curren and every Windansea young surfer like Butch Van Artsdalen and Carl Ekstrom. Phil Edwards came around in the late 50’s and was equally as good as Buzzy, but considered not as strong. Surf photography was just coming in and there were no magazines until the 1960’s. But everyone knew then and by word of mouth who the best surfer was and it was Buzzy Bent.”12

Of the post-war new generation of surfers -- of which he and Buzzy were part -- John Elwell wrote: “Velzy was smoking pot under the Hermosa Pier shaping boards... Teen age drinking, pot, and regular trips to TJ. The post war generation lead to a cultural surfing change. They were the nuclear age surfers and lived under threat of nuclear annihilation and did not give a shit and wanted to get as many waves as possible before it happened. Buzzy and others portrayed this wild devil may care generation. Butch [Van Artsdalen] and many others did, also, and died early.”13 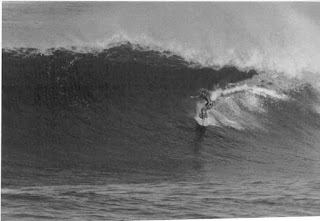 “Buzzy went off to college at the University of Colorado and surfed during summers and skied during the winter,” recalled Elwell,14 graduating with a degree in business.15 “He married his sweet heart at college and got a commission in the US Navy.”16 He was commissioned as an officer in the Underwater Demolition Team (the precursor to the current Navy Seal Team) stationed at Coronado.”17

“Buzzy had been a very good high school athlete and student, and was physically strong,” Elwell continued. “He became stronger after UDT training.”18

After his time in the military, Buzzy made custom surf boards, working first with balsa and then foam during the transition in surfboard core materials. He bought a vintage wooden hulled ketch which he lived on in the San Diego harbor and sailed around Southern California and Mexico.19

Buzzy moved to Aspen in 1961 for a winter of skiing. He taught skiing, joined the Highland ski patrol, worked as a waiter and took on various other jobs before forming a partnership with Hawaiian surfer, Joey Cabell. They opened the Chart House restaurant on Durant Street across from the Little Nell, in Aspen, on July 4, 1962.20

“The first location was modest, with just a few tables in a converted diner. However, two principles present in 1962 remain staples of every Chart House location – great food and equally impressive views.”21

“He met up with Joey Cabell who had restaurant experience in Hawaii,” remembered Elwell, “and with borrowed money started the first Chart House restaurant in Aspen. Then quickly had a chain of successful steak houses hiring close friends as managers and partners. They were quickly millionaires. Buzzy still surfed and became a Class A ski racer. He made brief appearances in Hawaii surfing and was far better than many others... Bud Browne said he filmed Buzzy on the biggest wave at that time at Waimea. Buzzy had the skill, strength, and courage to go toe to toe with the best in Hawaii and in the world by all who knew him and surfed with him. There are only a few photos of him surfing and he was forgotten as other surfers came into the spot light.”22

After the success of the first restaurant Buzzy and Joey went on to open three additional Chart House restaurants, including the one in La Jolla, before Buzzy sold his interest in the company.23

“Branches soon appeared in Redondo Beach, Newport Beach, and Honolulu...” wrote Matt Warshaw in The Encyclopedia of Surfing. “The Chart House became a kind of surfing institution, as generations of Californian and Hawaiian surfers took jobs there as waiters or bartenders, so as to free up daylight hours for surfing.”24

For Buzzy, there was a downside to the success of the Chart House chain, even though he did not realize it at the time. “There was so much money; too fast,” his friend John Elwell emphasized. “Buzzy bought an airplane, a Ferrarai, went into sky diving, drugs and alcohol; other women and divorce, and another marriage, relationships, and more children. Then, a succession of tragedies with his brother crashing and killing himself in the plane off Windansea, his mother dying of cancer, and a gifted beautiful, honor student, daughter dying in Nepal on a trip suddenly of disease.”25

“One of the great tragedies in Buzzy's life,” remembered Butch Van Artsdalen’s sister Annette, “was the death of his younger brother PG Bent (along with Pete Sachsie) in a plane accident over WindanSea Beach.

“I was told that PG was always trying to measure up to Buzzy’s lofty reputation by doing daring things and that the plane crash was a result of one such thing. The source told me that Buzzy blamed and never forgave himself for his brother's death.”26

“Buzzy took a pay off in the Chart Houses, as they declined,” recalled Elwell, “tried other restaurants, had a beautiful sail boat, invested in a movie that didn’t make it and lost more money. Joey Cabell kept the Hawaii Chart House. The management tried to buy the franchise out and the enterprise was sold and resold.”27

Buzzy continued to reside in Colorado where he owned an organic fruit farm in Paonia, lived in Telluride, and later returned to La Jolla to open a restaurant, ‘The Waves Bar and Grill,’ before settling in New Meadow, Idaho.28

“What I will always remember about Buzz was his positive attitude,” wrote his friend Ed Andrews, “his genuine smile and his creative ingredient. His restaurant in Telluride, the ‘Cimarron’ had a model of his yacht on the wall in the bar area. In the dining room, there was a huge photograph (like 10 feet tall and 15 feet wide) of him and Greg Noll taking the drop at Waimea Bay on the biggest wave ridden that year (69). Buzzy was driving down the face of a 30 footer right next to Noll. He was fearless!”29

“Buzz was never pompous or arrogant,” continued Ed Andrews. “I drove to McCall, Idaho to visit Buzz a few years back and saw the work he had done on the restaurant/cafe he wanted to open in New Hope. He took an old run down loggers cafe that had been closed for years and turned it into a beautiful interior which all of us would have been proud to have been a part of. It is so unfortunate that he never got to open it.”30

“Those who are still alive still remember Buzzy as ‘The Wunder Kind,’” John Elwell said of his friend. “A highly skilled surfer whose rapid rise to wealth combined with tragic circumstances... He will be remembered as Windansea’s earliest and best post-war surfer; a good guy by all that knew him.”31