The The Surfing Heritage and Culture Center (SHACC) [formerly the Surfing Heritage Foundation] plays a key and expanding role in preserving our history and culture as surfers.  Among the many other things it is and does, it is the official repository of my collected surf writings, thanks in large part to good friend Dick Metz.

During my visit to SHACC in the Summer of 2017, longtime friend Darin McClure of RTGit took some photo synths (360-degree virtual reality images) of SHACC's replica of Dale Velzy's shaping shack. It is posted below. Use the rectangle to move around, the compass to rotate, and the +/- to zoom in or out; clicking on the image will also get you to move forward or back. Using the tools, you'll be able to move all around the shack and close up on things that interest you about Velzy and shaping.

Some still shots from my visit:


Jack's kicked out and has been sent along his way with the largest paddleout in history: 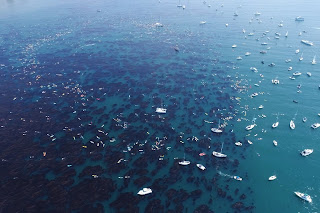 If ever there was an appropriate home for the overused word “iconic,” it’s snugged up close to the name Jack O’Neill. This pilot, diver, skier, surfer, sailor, balloonist, windsurfer, businessman, innovator, marketeer … well, he changed our world. Before Jack, you didn’t see many surfers north of Point Conception, but when he created the neoprene wetsuit for surfing, back in the mid 1950s, well, that changed.

Jack was a presence at Santa Cruz beaches since the early 1950s, when he and his wife Marge would come down from San Francisco on weekends; but he really became a presence when he opened his first surf shop down at Cowell’s Beach in 1959, and then his enduring shop and wetsuit factory at 1071 41st Ave., about a mile from his unique home at Pleasure Point, on the water side of East Cliff Drive.

Since the 1970s Jack made a home there, watching the surface of Monterrey Bay rage and go calm, ripple with the wind and turn slick as glass, glow with morning sunrises and evening sunsets, and brood under cloud and disappear altogether in muffling fog. Meanwhile his wetsuits, in untold numbers, opened the world’s oceans to divers and sailors and swimmers and surfers, too. In the process, the O’Neill brand became one of the most well known on the planet, from Norway to Tasmania, from Japan to South Africa, from Chile to Canada. But the heart of it all was here in Santa Cruz.

Jack has left the scene now. His home is still there on East Cliff Drive, but Jack’s not in there, gazing at the waves, the surfers, the boats out on the bay. But his influence continues, especially with the O’Neill Sea Odyssey program, which has already shown thousands of kids that the ocean isn’t just water, it’s alive with brilliant little organisms that are key to life on earth and the air we all breathe. Making sure that the next generation understood that enormous truth was the pinnacle of Jack’s work on behalf of the oceans. That, above all, is his living legacy.

Drew wrote Jack's biography, published in 2011. It is still in-print and can be borrowed at a number of locations:
https://en.wikipedia.org/wiki/Special:BookSources/978-1452102603

It can also be purchased: https://books.google.co.th/books?id=kF2puAAACAAJ&dq=isbn:9781452102603&hl=en&sa=X&ved=0ahUKEwjKjfexm4XVAhVIMI8KHcc5CB0Q6AEIJjAA

Posted by Malcolm Gault-Williams at Wednesday, July 12, 2017 No comments: