At least one area along Africa’s Ivory Coast is documented as having an indigenous type of bodyboarding as early as the 1800s.1

The earliest recorded surfing event occurred in South Africa, at Muizenberg, Cape Town, in 1919. A Capetown woman by the name of Heather Price befriended two United States Marines returning aboard a U.S. naval vessel, from World War I. The two Americans had with them a solid wooden “Hawaiian” style surfboard which they used at Muizenberg and which they also encouraged Heather to ride standing up.

In later years, Ross Lindsay’s wife Kay (Heather’s niece) visited her in Zimbabwe before her passing. At that time, Heather gave Kay the images that document the event. She said emphatically that “she surfed standing up” and made it clear that she advanced beyond lieing down flat on the board.

Heather’s riding at Muizenberg in 1919 was an isolated event and did not spark further interest in surfing in South Africa, at that time. The Marines took their boards with them when their ship sailed back to the United States.2

Also in 1919, Tony Bowman, a World War I pilot, returned from England to South Africa. After working in Johannesburg, he settled in Capt Town in 1921. Some time after 1922 and reading Jack London’s The Cruise of the Snark – where London described George Freeth and surfing at Waikiki – Tony determined to ride some waves of his own. He set about building a surfboard, which he later described as a “boat,” that he and his friend Tommy Charles could ride together. With Tony “paddling madly,” Tommy steered. From Tommy Bowman’s memoirs, he recalled “some time later” that he wrote the Honolulu Tourist Association, requesting surfing pictures, so that he could deduce the dimensions of the boards being used at Waikiki at that time.

Somewhere along the line – probably after 1929 when Tom Blake started building the first wooden chambered hollow surfboards – Tony and two friends, Lex Miller and Bobby Van Der Riet, constructed three boards using a timber framework covered with ceiling boards and wrapped in painted canvas to help make the boards watertight. The “Three Arcadians” made the boards in a workshop behind the Arcadia Tea Room. Later, they would improve their designs and were soon joined by others as surfing became popular at Muizenberg Corner. 3

Meanwhile, swimming in the warm waters off Durban beaches had become popular. In 1927 and 1928, the Durban Surf Life Saving Club and Pirates Surf Life Saving Club were founded on the Australian lifesaving model. Members were competent ocean swimmers and held safety in high regard. They borrowed rescue techniques where they could, adapting them to the Durban coast while patrolling crowded beaches. “Bathing in those days consisted of waist to chest high venturing into the sea, with the more adventurous souls body-surfing and planing on rudimentary wooden ‘belly boards.’”4

One of the adventurers was Fred Crocker, a railways carpenter and member of the Pirates SLSC. By the mid-1930s, he was experimenting with various types of watercraft. “He was quite keen on going out on boats and things” and “he had made a few boards that didn’t go too well,” remembered Gabie Botha, a World Life Saving President, two time shark attack survivor and friend of Fred’s.5

The true birth of stand up surfing in South Africa did not come until after the Empire Games were held in Sydney, Australia, in 1938. Alec Bulley, South African swimming coach and member of the Durban SLSC, had visited a Sydney beach during the time of the games, to see what the lifesavers were doing there and to sketch the watercraft being used in the surf. Upon his return to Durban, Bulley gave his sketches of the Crackenthorpe surf ski to Fred Crocker who built a crude replica.6

“The Pirate’s prototype (Fred’s) was twelve foot long and two feet wide, which tapered back and front. Boarded over deck flat bottom made the craft very heavy, and two men needed courage and energy to handle it.”7 Peter Forster of the Durban Surf Club constructed two more a little later.8

“The next thing he made was the Crocker Ski,” Gabie Botha recalled. “The Crocker Ski came in when I was in the war. That was about 1943. He started building Crocker Skis. Lou (Johnson) used to write me and tell me how they were building skis; he told me how they built them with a wooden frame and with them in the air-force, they used to pinch the airplane dope.”9

“In 1945 Fred Crocker constructed a smaller ski of his own design,” detailed a SA SLSC Souvenir Program from 1957. “It was 10 long, later reduced to 9 feet and two feet 6 inches wide. With a pointed nose and squared stern, was 6 inches in depth and had a framework of light timber. A revolutionary method of covering was introduced, being 18oz canvas, painted. The next improvement was the use of dope in place of paint, and made the ‘Crocker’ ski almost leak-proof, with the added advantage of strengthening the canvas, besides enabling the use of 10oz canvas which lightened the ski considerably. The ‘Crocker’ ski was hailed as the ideal craft to ride any size or type of wave.”10

The Crocker Surf Ski was a further evolution of the surf ski first invented by Dr. G.A. “Saxon” Crackanthrope, a stalwart of the Manly Club, N.S.W., Australia.11

The surf ski “probably evolved out of the use of canoes in the surf at North Bondi,” guessed legendary surfer Nat Young. “Because you paddled the ski with an oar, sitting down, it was easier to ride than a board. Originally the skis were 8’ long and 28” wide and made of heavy cedar planking, but this gave way to plywood over a light timber frame. Surf club competition drew the skis out in length and eventually another man was used to gain more speed and make it more of a team sport; this led to the standard two-man double ski, a sort of tandem bike on water. In contrast to the surfboard, the surf ski was quickly adopted by the Surf Life Saving Association as official lifesaving equipment. Surfboards, however, were tolerated by officials because so many loyal club members used them, displaying their club badges printed on the decks together with the club’s colors running in pin stripes around the rails. The surf club was a tremendously prestigious institution during this period. Australian girls liked the idea of going out with one of those ‘bronzed gods’ and the surf club ranks swelled to reach 8,454 members in 1935.”12

On his second trip to Australia, Duke Kahanamoku brought back a surf ski, the first to reach Hawaiian shores. Nobody expected to be impressed by something from Australia, but Hot Curl surfer Wally Froiseth admitted, “Yeah, it impressed us. It was something new, something we’d never seen. It was great. You know, my thinking is... every area has contributed something. I don’t care where they are, these guys have contributed. Nobody can say that they did the whole thing. There’s just no way. Nobody’s got all the brains. Nobody can think of all aces. It’s good.”14

The lead role of South African Fred Crocker in design and development of his skis helped establish a community of stand-up wave riders at Country Club and other beaches in Durban. The way the skis would be ridden was to stand up holding a double bladed paddle that was secured to the nose by a rope, also ties to the paddle shaft. This tether was useful to pull the nose of the craft up as the rider leaned backwards when paddling out and for steep take-offs.15

Other water craft innovations occurred, but all were variations on the Crocker design. Around about the time of WWII, Crocker, himself, experimented with a narrow “sit-down ski” which was later used as a surfboard without the double bladed paddle. It was this type of board that was first ridden by surfers in Durban.16 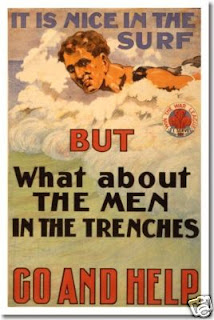 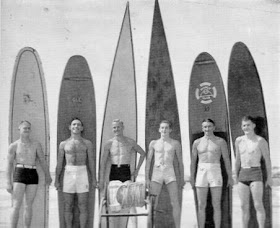