Welcome to this chapter in the LEGENDARY SURFERS series, on John Kelly!

For more about John, please view the montage Glenn Hening put together about John's life and work:
http://files.legendarysurfers.com/surf/legends/ls10_JohnKelly_glennHening.pdf 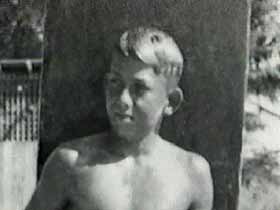 In early 1937,[1] John Kelly, then a 17 year-old surfer from Black Point, made surfing history. As surf writer Matt Warshaw wrote, it was “a raw, satisfying, hugely important moment in surfboard design history” when he cut down the first Hot Curl.[2]

Kelly was born on March 3, 1919. “My folks and I sailed out of in 1923, on a ship called the Matsonia, when I was four. As we approached Honolulu Harbor, I think it was six or seven days later, the first thing I saw were a lot a trees, pine trees, on what is now known as Sand Island. From a distance the trees seemed to be growing out of the ocean.”[3]

Kelly’s father was a Bay Area artist when he accepted a one-year job to create promotional illustrations for a housing development in Lani-kai, on the windward side of O‘ahu.[4] His mother was also an artist and, shortly after their arrival on the island, promptly had an etching of the newly-opened Royal Hawaiian Hotel published in the local paper. “My parents weren’t really political,” Kelly, politically active himself at age 75 said in 1994. “They were artists, plain and simple. They loved people, and they loved freedom. They certainly had no problem, later on, with me getting involved with radical politics.”[5] John’s father, John Melville Kelly, earned acclaim for his etchings of Islanders and for his designs on the menu covers of the Royal Hawaiian Hotel. His mother, Katherine Harland, was a noted sculptor.[6]

The Kellys soon moved a few miles east of Waikiki, to the Kahala section of , building a shingled cottage at Black Point that overlooked the ocean. In the mid-1920s, after his mother gave him an old ironing board to mess around with, Kelly – aged five or six – first tasted the reef surf of Kahala. It wasn’t until he was nine that Kelly got his first real surfboard. It was a custom 7-foot redwood board shaped by David Kahanamoku, one of Duke’s brothers.[7] Kelly’s dad drew “Keone” (“John” in Hawaiian) on the deck and John engraved the letters into the wood, himself.[8]

An old Hawaiian fisherman who lived in a cave near the Kelly home became John’s adopted grandfather and mentor, teaching the young surfer how to make both cotton and linen nets, and how to catch moi and parrot fish.[9]

“The Makakoa family had a lot of kids,” John said of some other Hawaiians who made a difference in his life, “and a lot of aunties and uncles, and they were very close to me and my parents. We pretty much lived together, all of us. We ate together and played together, and I remember a lot of music and dancing.”[10]

From the Hawaiians and a group of Filipinos who had walked off the sugar fields, Kelly learned how to live comfortably around the ocean; useful things like diving to catch lobsters and picking tidewater limpets off the rocks.[11]

Kelly went on to not only cut down the first Hot Curl surfboard and venture out into bigger surf, but also became a decorated sailor who witnessed the Japanese attack on Pearl Harbor in 1941, even helping to pull people from the water. In 1944, Kelly, a skilled free diver, earned a Navy and Marine Corps medal of heroism for voluntarily retrieving submerged torpedoes off Kaho‘olawe with just his goggles and a gulp of air. He told a reporter at the Chicago Daily News War Service that “any Islander could have done it.”[12]

After the war he regrouped with his Hot Curl buddies and graduated from , earning a bachelor’s degree in music from the prestigious in 1950.

For years he conducted symphonies and choral groups and served as the director of the music school at Palama Settlement.

“Our parents gave us so many opportunities to experience different kinds of art and music,” said his daughter, Kathleen Kelly. “I remember being a little girl, half-awake at these late rehearsals and watching him get these people to sing... He was used to getting people to work together, to connect.”[13]

John Kelly went on to not only conduct symphonies, but write books and speak out against nuclear weapons, founding Save Our Surf, a grass-roots environmental group responsible for saving 140 surf sites on O‘ahu from development.[14]

“He was probably the greatest humanitarian I’ve ever met in my life, and I’ve looked around,” said longtime friend and fellow surfer George Downing. “You couldn’t buy John, you know what I mean? And people tried. You just couldn’t budge him.”

Founded in 1961, Save Our Surf fought to prevent offshore development around the that would have destroyed reefs, surf sites and other ocean resources.

“I can’t imagine what this place (Hawai‘i) would be without him,” Downing added.[15]

At its peak, the group — which consisted of dozens of surfers, ocean-users and environmentalists — staged protests, organized beach cleanups and spread the word using posters and leaflets about development projects that would impact the environment.

These activists helped thwart the state’s plans for a proposed reef runway from Wai‘alae to Hawai‘i Kai, a beach-widening project in Waikiki and evictions of families on , which later became a historic site.

“He was a pain in the neck sometimes, but I had to admire the guy because he was a leader in protecting and preserving the greatest natural resource we have here,” said Bill Paty, 86, chairman of the state Department of Land and Natural Resources from 1987 to 1992 and longtime surfer. “He was willing to go to the mat with anybody. ... I tip my hat to him. He kept us on the right track.”[16]

In 1963, Kelly came up with a board that, while it never caught on, demonstrated his continued drive to experiment with wave riding vehicles. His “hydroplane surfboard” was a strange design, meant to combine the speed of a longboard and the maneuverability of a shortboard in its slightly raised tail section.

“It was a crazy board,” surf champion and Hawaiian legislator Fred Hemmings recalled, laughing. “But it showed some real innovation. Even though it wasn’t functional and it never caught on, in a curious way it was illustrative of his character. He was an out-of-the-box thinker, an innovator.”[17]

John Kelly also wrote books, most notable Surf and Sea, 304 pages covering nearly every aspect of the sport, published in 1965.

He also did a lot of self-printing; usually of fliers, posters and leaflets for Save Our Surf on an antiquated printing press in his basement that would run all hours of the night. “I used to sleep in the room above (the basement),” his daughter Kathleen remembered. “And it would be running until 3 or 4 a.m. Clickety-clack, all night long.”[18]

Kelly’s speaking out against nuclear weapons and organizing others in the same pusuit allegedly cost him his job at Palama Settlement.

In 1959 he served as a delegate to the Fifth World Conference Against Atomic and Hydrogen Bombs in . He considered it a “privilege and a duty as an ordinary American citizen.”

“Good for him that he spoke against that racism, that arrogance, that insanity,” said Kathleen Kelly, who inherited her parents’ activism and was arrested at a protest in 1967.

When she called home from jail, her parents responded, “Good for you,” Kathleen said, laughing.

In 2004, the Hawaiian Collection of Hamilton Library received a $3,075 grant from the University of Hawai’i-Manoa Diversity and Equity Initiative to digitize posters, fliers and other ephemera from Save Our Surf to preserve the history of this social and environmental movement. The collection is currently available online.[20]

“He knew that if you stick together and educate the public about what’s really going on and speak out, you can have victories,” Kathleen Kelly said. “You can win these things that make a difference.”[21]

“I remember seeing John surfing at the point at Makaha,” said Fred Hemmings who was a kid in the early 1950s, but later became a world surfing champion and a state senator. “There weren’t many people surfing out there then... And as with most surfers in those days, (Kelly) was iconoclastic. He was a man who definitely did his own thing.”[22]

For decades, he would jump off Kupikipikio Point, surfboard in tow, and catch waves at Black Point or Browns. As he got older, bodyboards replaced surfboards until he eventually ditched them both. Instead, he would climb down the cliffs, glide into the ocean and swim all the way to Ka‘. His wife, Marion, would walk from their home to the beach with his slippers and a towel. Then they would walk back to Black Point together.

“This guy once told me he went for a swim with John, just on his regular swim,” George Downing said. “And he told me, ‘I thought I was going to die. But John didn’t blink an eye.’ He was special.”[23]

About 20 years before his death, Kelly was struck on the head by his own surfboard, leading to a decline in his mental capacity. Also, soon after the accident, he was diagnosed with Alzheimer’s disease. On top of that, in 1995, he found out he had bladder cancer.

Just a few months before his passing, John Kelly, who was still lanky and nimble, would swim back and forth in the saltwater pool near his home at Black Point. He passed away quietly and peacefully, on his 64th wedding anniversary, at the age of 88.[24]