[Some great 1920s shots of Long Beach are at: Don Fleming photos and comments]


By the start of the 1930s, ’s surfing epicenter was located at Corona del Mar.  But SoCal surfing had begun up the coast first at in 1907, then Redondo and , spreading out from those beaches.[1] 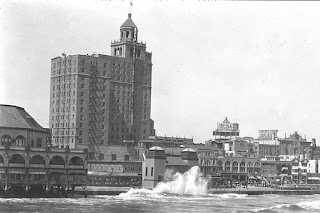 Surfing’s evolution in the area can be seen in a reading of the local newspapers of the period, especially the ones around .  Surfing in ?  It is hard to imagine today, but once upon a time – before the breakwater was built in the early 1940s and before the area’s massive landfill was undertaken – not only did excellent surf break upon its shores, but was once considered “the Waikiki of the .”  Today, despite the disappearance of the that gave the city its name, some surfers still remember the old days and for those of us a bit younger, we have the newspaper record:
Press, April 7, 1910 – “SUGGESTS USE OF SURF BOATS: VISITOR JUST IN FROM FAVORS NEW AMUSEMENT FOR
“W.P. Wheeler of , , who has arrived in to spend the summer after a winter in , suggests that some enterprising man with a little money build and put in operation a lot of surf boats, for which Waikiki beach, is famous.
“Mr. Wheeler says that is the only beach he has ever seen which can compare with the famous , and that the surf rolls here exactly as it does at that beach.
“‘When I saw those catamarans, or surf boats, operated at ,’ said Mr. Wheeler, ‘I wondered why the Pacific coast beach resorts did not take to them.  I was told while in , by an admirer of Waikiki, that no beach on the coast was as shallow and long as .  Now I know that the fellow was not well informed, for the beach here is exactly like the Hawaiian beach.’”[2]
To my knowledge, the first recorded lifesaving action using surfboards in U.S. Mainland waters took place on September 3, 1911:
Daily Telegram, September 4, 1911 – “TWO LIVES SAVED BY SKILLFUL USE OF HAWAIIAN SURFERS
“One of the most novel rescues every pulled off in the surf at Long Beach was accomplished yesterday afternoon on the beach west of Magnolia Avenue when Paul Rowan of Long Beach and a stranger who slipped away before his identity could be discovered, were saved from drowning by Charles Allbright and A.J. Stout.
“The two rescuers were also nearly exhausted and were helped to the beach during the latter part of their spectacular trip by the hotel life guard, John Leonard, who was unaware of the trouble until he saw the men struggling to reach shore against a strong rip tide.
“Both the rescuers met and became close friends in and brought Hawaiian surfboards over with them recently to try them out in the local surf.  Paul Rowan, who is a strong swimmer, was out beyond the end of the lifelines, which extend from the beach to a point beyond the breakers.  He was swimming about, enjoying the exercise when he heard a cry from a man who was nearer the shore, but just beyond the breakers.
“’For God's sake, help me.  I have a wife on shore,’ gurgled the stranger, a man of about thirty years of age, as he began to sink.
“Rowan went to his help with a swift overhand stroke and caught him just as he was sinking a second time in the strong offshore current.
“The stranger immediately grabbed hold of Rowan and held him so that he had to fight to free his arms.  Rowan was also dragged under.  It was at this point that Allbright and Stout, on their surfboards, became aware of the situation.
“Allbright grabbed Rowan, who was dizzy from his forced immersion and placed him on his surfboard.  Stout did the same for the stranger.  Just then a succession of big breakers came along and the two men, with their burdens, coasted magnificently inshore against the rip tide.
“The peculiarity of the Hawaiian surfboards was to a large extent responsible for the effectiveness of the rescue of both the stranger and his first rescuer, Paul Rowan.  The boards are made of the beautifully grained koa wood of the Hawaiian Isles and are six feet long.  They are three inches thick and eighteen inches wide.
“Both Allbright and Stout are expert surfboard riders and for years coasted on the foaming breakers which run in on the beach between Diamond Head and .  There the mountain high breakers travel at great speeds for a distance of nearly half a mile.  Yesterday they were riding the breakers with the greatest ease in front of the and a large crowd was watching them as they stood up on the boards and coasted rapidly ashore.  The rescues yesterday were probably the first of the kind.  The success of the men with their boards may result in the general use of the same type at the beach.
“Both Allbright and Stout made light of the incident, and from information supplied from other sources it was learned that they frequently make similar rescues out in the .”[3]
Long Beach Press, February 26, 1921 – “NOVEL SURF BOARD AND CANOES MADE
“Surf-boating has made such an appeal to visitors to during the past year that Victor K. Hart, manager of ; and T. Bennett Shutt, local building contractor, have completed arrangements to manufacture surf boards and surf canoes here in quantity.  A temporary factory has been opened and twenty of the surfboards and a dozen canoes are now being built.
“Erection of the flood control jetties has checked the ocean currents to such an extent that splendid surf-boating is now to be enjoyed on the west beach.  The surfboards under construction here were designed by Hart and Shutt and are said to be lighter and different in shape to the Hawaiian island boards.”[4]

One of 's first surfers was Haig (Hal) Prieste, who won an Olympic diving medal at the 1920 Olympics.  There, he met Duke Kahanamoku and accepted an invitation to visit him in Hawai‘i, where he took up surfing and became an honorary member of the Hui Nalu:
Press, May 3, 1921 – “LOCAL BOY TO ENTER BIG MEET IN
“Haig Prieste, boy and former Poly High student, winner of third place in the Olympic games diving contests, leaves Friday for en route to the Hawaiian islands, where he will enter the junior national high diving contest which is to be a feature of a big aquatic carnival to be held in .  Prieste will be the only swimmer to enter the meet from the mainland, a special request for his presence having been made by the swimming officials at .
“Following his appearance at , Prieste may continue to the where he has been requested to enter a number of contests with the best of the Australian swimmers and divers.  Whether he will make this trip or not depends upon contracts which he has with motion picture concerns.  Prieste formerly was connected with Mack Sennet and with the Rollin and Gasnier studios doing ‘dare devil’ stunts in comedy productions.  He has achieved quite a reputation locally as a sleight of hand entertainer in addition to his prowess as a high diver.”[5]
Daily Telegram, August 15, 1921 – “HAIG PRIESTE HOME FROM THREE MONTHS OF HAWAIIAN TOUR: HAS MAMMOTH SURFBOARD GIVEN HIM
“Haig Prieste, Olympic diving champion, returned to with a ukulele, an oversize surfboard and an interesting story of three months in the .  He intended to remain three weeks when he left as the only American entrant in the Hawaiian carnival staged in the latter part of May.  The charm of the islands, the determination to master Hawaiian surf board riding – and the ukulele – and an opportunity to gather a couple of spare diving championships kept him several weeks overtime.
“He won the junior national high diving title and the springboard diving championship of a half dozen islands.  He brought with him the Castle and Cook trophy and several others of lesser significance.  He was the guest of honor and an honorary member of the Hui Nalu swimming club, the leading aquatic organization of the islands.
“Prieste and Duke Kahanamoku palled around together at for a time.  Prieste astonished the natives when he learned to ride the gigantic surfboards standing on his hands.  ‘It's the greatest sport in the world,’ he said today.
“Prieste says that the expert Hawaiian surfriders are able to ride for three-quarters of a mile on their boards.  They have grown up with a surfboard in one hand, and by learning the formation of the coral reefs and the various currents, they are able to pilot their boards for great distances in a zigzag course.  The waves bowl them along at a speed of 35 miles per hour.  There is a great knack in catching the wave at the proper angle, Prieste says.  Unless the board is pointed diagonally at the correct angle at the correct moment both board and rider will be dumped on the coral floor of the ocean.  Prieste spent from 8 to 10 hours in the water each day.”[6]
Press-Telegram, December 31, 1926 – “BEACH GREATEST
“Board surfing has been growing in popularity year by year.  While most of the boards used are short and only for the surf after it has broken, yet there have developed some who have learned to ride the waves while they are still huge and green without any white water.  Some of the beach guards have mastered an art before confined to the surfing beaches of the .
“Even some of the girls have become proficient in this exciting water sport.”[7]
Early tandem surfing:
Press-Telegram, March 18, 1927 – “TWO DARE DEATH
“A special exhibition of fancy riding on surfboards will be performed by Elmer Peck and Miriam Tizzard at .  Peck has attained national stunts that he has performed in all parts of this country as well as in the waters off and the South American republics.
“Miss Tizzard is a local girl and though she has only been under Mr. Peck's direction for two weeks he regards her as one of the most apt pupils that he has ever trained.  He says that she is perfectly at home on the elusive surfboard.  Special stunts in which the two combine will be a feature of the program offered.”[8] 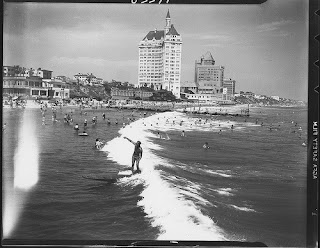