During the 1920s, in California, there were small numbers of “Roaring ‘20s” surfers riding waves at a limited number of breaks from to , but the most popular break was Corona del Mar.  This had probably as much to do with the nightlife at Balboa, north across the channel leading to , as it was to ’s exceptionally nice set-up, surf-wise.  The good surf at was all about the south jetty. 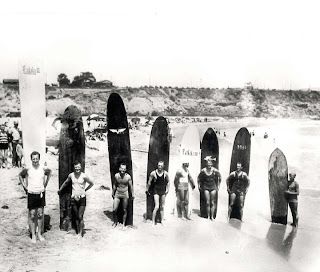 Although not originally intended for surfers, the cement jetty at Corona del Mar was a boon for surfriders.  The 800-foot long jetty stretched from the rocks at Big Corona all the way to the beach.  When the swells were running, a surfer could launch from the end of the jetty, ride in next to it for approximately 800 feet, then climb up a chain ladder, run out on the jetty and do the same thing all over again.  Perhaps more importantly, waves jacked up at unlike they did anywhere else – also due to the jetty.

In 1923, two beacon lights were installed at the jetty entrance.  These were written about in a Long Beach Press article, in December: “The two beacon lights at the end of the jetty protecting the entrance of harbor are complete and have been turned over to the care of Antar Deraga, head of the Balboa life saving guards… The lights are about thirty feet above the ocean level and can be seen by all ships passing on the east side of Catalina.

“The government lighthouse service will also supply the keeper here with a lifeboat for use in rescue work.  It will be in charge of Mr. Deraga, who is known as one of the most efficient lifeguards on the coast.  Before coming here he made an enviable record in Europe and has recently been made a member of the Royal life saving guards of and given a service medal in recognition of heroic service in the and also for saving the life of an English lady in this harbor last summer.”[1]

Antar Deraga was also one of those who, along with standout surfer and Olympic champion Duke Kahanamoku, helped rescue the majority of the crew of the Thelma when it floundered off in 1925:

“Battling with his surfboard through the heavy seas in which no small boat could live, Kahanamoku, was the first to reach the drowning men.  He made three successive trips to the beach and carried four victims the first trip, three the second and one the third.  , Plummer and Derega were credited with saving four; while other members of the rescue party waded into the surf and carried the drowning men to safety…

“The accident occurred at the identical spot near the bell buoy where, almost to a day a year ago, a similar accident occurred and nine men were drowned.  Two of the bodies were carried out to sea by the undertow and were never recovered.

“The Hawaiian swimmer was camped on the beach with a party of film players and was just going out for his morning swim when the boat was wrecked.  The lifeguards were just going on duty.”[2]

There was an established record of difficulty for boats leaving and entering the Newport Channel on a good swell.  In 1927, the city of voted $500,000 for a harbor expansion that included changes to the jetties.  In 1928, the city approved $200,000 for work on both the west and east jetties.  It was this later work that would forever change surfing at Corona del Mar – especially the surf adjacent to the east jetty – and be lamented by surfers who considered the main surfing .[3]

Surfing’s first dedicated surf photographer Doc Ball eulogized the early surf scene at Corona del Mar, when he later wrote in 1946: “We who knew it will never forget buzzing the end of that slippery, slimy jetty, just barely missing the crushing impact as the sea mashed into the concrete.  Nor will we forget the squeeze act when 18 to 20 guys all tried to take off on the same fringing hook.  And do you remember the days when you waited near that clanging bell buoy for the next set to arrive?  Mar’s zero surf was hell on the yachtsmen but – holy cow – what stuff for the Kamaainas.  Yes!  Those were the days.”[4]

During the area’s boom-days of the 1920s, a housing development originally named Balboa Bay Palisades was created in 1923 and morphed into what we now call Corona del Mar.  During that decade, the area’s income came mostly from the Rendezvous dance hall, gambling and bootleg liquor.  The Rendezvous Ballroom was the place to be and a major destination for touring big bands of the time.  On a Saturday night the town bore a resemblance to , in , during Mardi Gras.  A number of businesses were involved in gambling.

More on the Rendezvous when we get to talking about Gene “Tarzan” Smith...