"Kit Horn passed away yesterday morning [3/26/2010] at age 80. Kit was one of the best, most reliable and unbiased resources of Malibu history of the 1940's. He was a fine surfer and a great guy admired by all. We will miss him." -- John Elwell 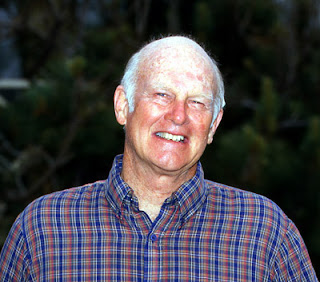 Kit Horn photo courtesy of Tom Keck
If you have a favorite Kit Horn story or memory to share, please leave a comment, below. Make it as long as you need and thanks.

There's also a thread at SURFER, with some additional stories and reminiscences. Please go to: SURFERMAG Community: Kit Horn. 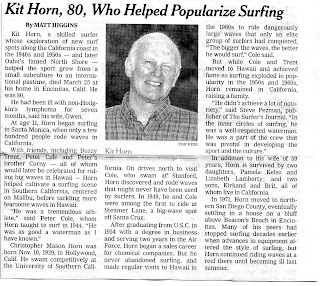 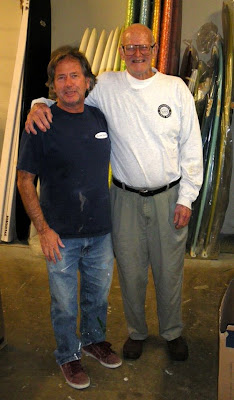 A story about Kit Horn from Corky Carroll:


One of the things that is necessary for me to do, but I don't like doing – kinda like paying bills and being responsible for myself – is reporting on the passing of our local surf legends and heroes. Well, this is one of those weeks. Another of our flock has pulled out: the great Kit Horn.

Kit led a very long and fruitful surfing life that dates back to the very beginning of the balsa wood surfboard era. In fact, there is a story that was relayed to me by Tom Morey that indicates that Kit was actually directly involved in the advent of the first balsa wood board.

The story goes that Kit and his buddy Bo Beck were young surf gremmies who used to get rides to the beach with the infamous Bob Simmons, who is credited with being the first to make balsa wood boards, along with other innovations. At the time, which I am thinking had to be the late 1940s or so, the boards were very heavy solid redwood and other combinations of heavy woods. The average board weighed 80 to 150 pounds.

One of the places they used to surf was Palos Verdes Cove. The cove had a long trail down a cliff to get down to the beach, and of course back up afterwards. There was a thing that the locals used to do for fun in those days. The first ones back up the trail would toss rocks at the stragglers coming up the trail. It was all in fun and the rocks were not thrown to hit anybody, just to make it interesting.

These days, they aim for ya and mean it. But back then, there was no localism and everybody was pals. So one day, Kit and Bo got to the top first and Simmons was coming up the trail lugging his huge heavy board, which was not easy as he had one bad arm. Kit and Bo started the rock-tossing game and were laughing their heads off. But one rock, not meant to hit Simmons, glanced off another rock and actually hit him in the shin. This caused him to drop his board, which slid down the cliff and got extremely damaged.

Simmons was red-hot angry. When he got to the car, he didn't say a word, just drove the boys home and dumped 'em off. They did not see Bob or hear a word from him for three months. Then one day, he shows up all smiles and friendly and asks if they wanna go surfing.

All is good and nothing is said about the damaged board incident. The boys are all happy thinking that all is forgotten. When they get to the cove, Bob has a new black surfboard on the car. They all go down to the cove and have a great surf session.

Afterwards, they are all hanging out getting ready for the trek back up the trail. All of a sudden, Simmons grabs his board and literally sprints up the trail to his car. When he gets up there, he starts raining down rocks across the trail so that the boys can only move at a snail's pace, making the chore of lugging their heavy boards even harder.

Simmons is in hysteria, laughing so hard. When they finally get to the top, worn out and sweating, Bob lets 'em in on the fact that his new board is actually made out of balsa wood and only weighs 45 pounds. He painted it black so they couldn't see what it was.

Kit went on to become a great surfer here in California and in the big surf in Hawaii. When I was very young and first riding big waves, I had many sessions surfing with Kit and respected him greatly as one of the best. He would become a top competitor in the senior divisions when surfing contests became big in California and became the top judge from the West Coast.

He represented the United States Surfing Association at the International Big Wave Championship in Peru and other events around the world.

One of my favorite memories of Kit was one freezing-cold rainy day at Huntington Beach. The surf was so big, it was breaking past the end of the pier and there was nobody around. Kit talked me into jumping off the end of the pier with him to ride the stuff.

I don't know what scared me the most, the surf or the jump off the pier. Neither fazed him. He was stoked. In fact, in all of my memories of Kit Horn, he was stoked.

And, here's a write up from Brad Melekian:


On March 26, consummate California surfer and waterman Christopher “Kit” Horn died at his home overlooking the surf in Leucadia. Horn, 80, a renowned surfer who began riding waves in Southern California in the early 1940s, continued surfing until last summer when he fell ill with cancer.

Horn’s surfing legacy will be his pioneering of surf breaks, particularly big-wave surf breaks, in California. Horn was among a legendary group of tough-minded original surfers who sought out and rode big waves in California and on the North Shore of Oahu in the late 1950s and early ’60s. He is famous for having ridden many waves in frigid Central and Northern California waters by himself in the same time period.

“He was known as one of the original big-wave underground guys,” says Matt Warshaw, author of the forthcoming The History of Surfing. “Everyone knew who he was and everyone knew he rode big waves, but he never went in for the big-wave celebrity thing.”

Horn, a lifelong athlete, began riding waves in Santa Monica in 1941, when the sport was primitive and relegated to a small band of surfers up and down the coast. An avid waterman, Horn would dive for abalone and lobster in Santa Monica Bay at a time when he could fill a gunny sack with either in an hour, said his son Brit. While he was committed to riding big waves, Horn, who earned a business degree from USC in the 1950s, where he was a member of the swim team, established a life in San Diego County, raising a family and working in sales.

He continued to surf throughout California through the decades, and Horn will be remembered by those he surfed with more recently for his ability to stay enthusiastic and excited about the sport well into his 70s. Many of the surfers he had ridden waves with in the 1940s, ’50s, and ’60s dropped out of the sport as it went through its permutations, but Horn reveled in surfing’s changes.

“He was 40 when the shortboard revolution came around,” Brit Horn said. “And he went with that change. When he was in his 70s, he was riding boards that were under seven feet in length.”

Horn also continued to ride big waves well into his later years. Brit Horn, who lives in Sonoma County, says his father kept a complete quiver of surfboards and always had at least four big-wave “guns.” Brit says he surfed with his father in the notoriously heavy surf at Point Arena in Northern California until his father was 72 or 73.

“I’m 51,” says Brit, a lifeguard and well-respected surfer in his own right. “I surf several days a week, and up until a few years ago, I could say that my dad surfed more than I did. He surfed pretty much every day that there were waves.”

“A lot of people around him would look to my dad,” Brit Horn says. “A lot of people surfed in the ’60s and ’70s, but stopped. It gave people inspiration. You know, ‘Kit’s still going strong and as stoked as ever.’ ”

Brit says his father’s enthusiasm for the sport came from what he got from riding waves. “Surfing kept him young,” he says. “It keeps all of us young, but my dad had a spirit about him that he got from surfing.”

Horn is survived by his wife, Gwen, and his four children, Pamela Kelso, Lizabeth Lamberty and his sons Kirk and Brit.
Posted by Malcolm Gault-Williams at Saturday, March 27, 2010