Some of the intriguing 1920s images from Pete Robinson's Museum of British Surfing: 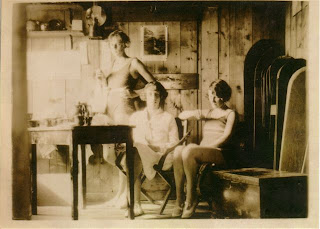 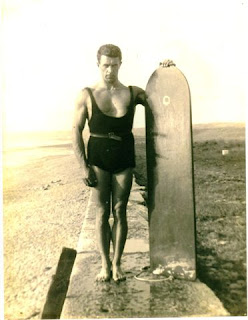 Jeremy Oxenden wrote about the image above: "Happy New Year, Malcolm. I was very pleased to find Peter Robinson and the UK Surfing Museum from the Bing site links. That is Oxo with the 5.5 prone surfboard. He surfed in Hawaii some time between 1919 - 1923. It must have been great fun back then. The Island Surf Club of Jersey UK was formed in 1923..."

Jeremy added this about the top image: "The Girls in the beach hut are Dot and Ching Martin, left and right, and Pat Oxenden in the middle. The beach hut went up in 1924. The German Army knocked all the beach huts down in 1940. My Grand Parents re-built their hut just after the war (WWII). It was their top priority. We still have the beach hut and still surf from there... Thank you for including Oxo and his surfing Gang."
Posted by Malcolm Gault-Williams at Tuesday, December 29, 2009 3 comments:

Ian Lind continues documenting the days of the Waikiki Surf Club, thanks to the collection of memorabilia his father John Lind left behind.

The latest is a series of scanned images of the club's newsletter "The Surfer" dated 1954-1956. For more on the Lind collection of Waikiki Surf Club images, please go to:

Also, In 2002, John Lind was asked for his recollections of the founding of the Molokai to Oahu canoe race on the occasion of its 50th anniversary.

These are saved by Ian at: Molokai to Oahu canoe race history
Posted by Malcolm Gault-Williams at Monday, December 07, 2009 No comments: