Stuart H. Coleman ’s new book "Fierce Heart: The Story of Makaha and the Soul of Hawaiian Surfing" is soon to be released.

The following is from "Launch Party for Stuart Coleman’s New Book 'Fierce Heart'" by Dennis Amith for J-Ent, April 17, 2009:

Makaha literally means “fierce,” and this community represents the heart of Hawaiian culture. Surrounded by jagged green mountains on one side and a powerful blue sea on the other, the small town of Makaha has produced some the most talented watermen in the world and Hawaii’s biggest icons. FIERCE HEART is the biography of their community and a portrait of their people. Starting with the rise of the Makaha International Surf Classic and Hawaii ’s statehood in 1959, the story focuses on two generations of the Keaulana clan, one of surfing’s most famous families. After winning the Makaha International in 1960, Buffalo Keaulana sailed on the maiden voyage of the Hokule’a in 1976 and went on to become one of Hawaii ’s legendary surfers, lifeguards and community leaders. His legacy has only grown with his sons and extended family in Makaha.

Along with being an accomplished lifeguard, big-wave surfer and Hollywood stuntman, Brian Keaulana pioneered the use of jet skis to perform rescues and revolutionized ocean safety in the process. His brother Rusty won three world longboarding championships in a row. Rell Sunn and Israel Kamakawiwo’ole were like older siblings, and they became the stars of Makaha during their short, brilliant lives. Sistah Rell was Hawaii ’s first female lifeguard, a pioneer in women’s professional surfing and a community activist. Starting out with the Makaha Sons and then going on his own, Bruddah Iz eventually became the biggest artist in Hawaii and the voice of the Hawaiian Sovereignty movement. Like shooting stars, Rell and Iz blazed a bright trail in the Hawaiian sky, but their lives burned out all too soon. On the 50th anniversary of statehood (and Israel ’s birth), FIERCE HEART chronicles the history of Hawaii ’s wild Westside and the enduring legacy of its leaders.

Originally from Charleston , S.C. , Stuart H. Coleman moved to Hawaii in 1993 to teach, write and surf. Coleman has taught at Punahou School , Iolani School and the East-West Center . His writing has appeared in numerous publications, including Men’s Journal, Salon.com, Sierra Magazine, Surfer’s Journal, The Washington Post, USA Today, Honolulu Magazine, Hawaii Magazine and Charleston Magazine. Coleman is the author of the award-winning book Eddie Would Go. He currently works as the Surfrider Foundation’s Hawaii Regional Coordinator and will be making donations to Surfrider and other community groups...

“FIERCE HEART is a memorable collection of stories about a unique place and a cast of characters that truly define modern Hawaiian culture and the spirit of aloha.”
– Shaun Tomson, author of Surfer’s Code & Bustin’ Down the Door

“Be warned, this edgy, fast-paced book is like surfing a Makaha wave - once you take off, there’s no turning back - once you start reading Fierce Heart, you will be unable to put it down. FIERCE HEART’s wisdom will linger with you for a very long time, and you will never look at your own life the same way again.”
– Sandra Kimberly Hall, author of Duke: A Great Hawaiian

“FIERCE HEART shines a light onto the world’s best-known, least-understood surf break.”
– Matt Warshaw, author of Maverick’s and The Encyclopedia of Surfing

“The spiritual home of the traditional, ocean-based culture of Oahu’s West Side is at Makaha, where the bonds of community have been nurtured and tested by the surf. Stuart Coleman gracefully guides us into this world with respect and heart.”
– Drew Kampion, author of Stoked!, Lost Coast and Greg Noll, The Art of the Surf Board

“The author of Eddie Would Go has crafted another masterpiece of insight, detail and sensitivity to the Hawaiian culture. Having made dozens of surfing trips to Makaha over the years, I’ve experienced both the warmth and distrust of its proud residents, and I always felt they were gravely misunderstood. Coleman tells the exquisite truth with remarkable depth.”
– Bruce Jenkins, San Francisco Chronicle, Surfer Magazine columnist, author of North Shore Chronicles


Praise for Eddie Would Go:

“As a homespun homage to a modern-day folk hero, you’ll see why St. Martin’s has decided to take Eddie nationwide–and why it’s attracting loving glances from Hollywood .”
- Outside Magazine

“Every surfer worth his salt will appreciate Eddie Would Go.”
- Mark Anders, Surfer Magazine

“Eddie was blessed with the right biographer; his soulful life has become a pageturner of a book. We always knew Eddie would go. Now, thanks to Stuart Coleman ’s compelling biography, we know why.” - Jesse Kornbluth, Bookreporter.com
“Only a mainland haole (Caucasian) could have written this book. Eddie Aikau has become such a powerful Hawaiian icon that the emotional, cultural and historical baggage would have immobilized a local writer trying to tell Eddie’s remarkable tale. Unencumbered by such a burden, Stuart Coleman is able to approach the story with the beginner’s mind of a Zen student, unclouded by any preconceptions. Coleman ’s other attribute in tackling this daunting task that he is a teacher, disciplined in seeking the truth from disparate sources.”
- Greg Ambrose, The Honolulu Star-Bulletin

“Stuart Coleman ’s new biography of surfing/lifeguard legend Eddie Aikau is fantastic…It’s about Hawaiian history, culture, values and especially ‘ohana (family). It’s about the Vietnam War. It’s about the ’60s and ’70s transitioning from ‘wine, women and song’ to ‘drugs, sex and rock ‘n roll.’ It’s about Duke Kahanamoku. It’s about the infancy of professional surfing. It’s about the creation of the Polynesian Voyaging Society and Hokule’a. It’s about time…My apologies to Coleman and the Aikaus for not adequately describing how good this book is or the scope of the material it covers.”
- Mark Cunningham, Honolulu Weekly

“This book is essential reading for any surfer interested in our modern history. It’s magic is in the way it joins up our culture’s recent past–eg. the birth of porfessional surfing and the crucial ’70s period when the North Shore dominated–with Hawaii ’s own cultural history. By focusing on the life of Eddie, a hero not just for surfers but also for the Hawaiian people, Stuart H. Coleman smoothly places surfing into its true Hawaiian context and thus gives us a much broader view of the place we see as our ‘Mecca” than any other surf book ever has. Help from most of the main players in Eddie’s life, particularly the Aikau family, means that the book is detailed, thorough and above powerful in a heartbreaking yet uplifting way. Every surfer should read it.”
- The Surfer’s Path

Posted by Malcolm Gault-Williams at Sunday, April 19, 2009 No comments:


Aloha and welcome to this LEGENDARY SURFERS chapter on surfer and surf photographer Leroy "Granny" Grannis! LEGENDARY SURFERS chapters on Granny, include:


Also, use the search box in the upper right hand corner to read all entries about Granny at LEGENDARY SURFERS. 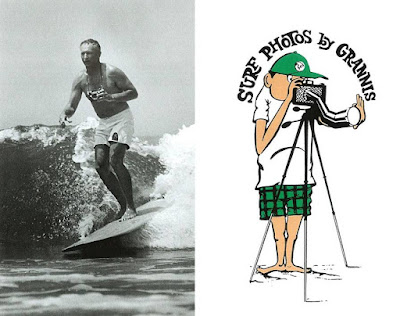 Posted by Malcolm Gault-Williams at Friday, April 17, 2009 No comments:

Another Walter Hoffman scrapbook, at the Surfing Heritage Foundation: